The Prosecutor’s office will appeal against the bail Guzhva 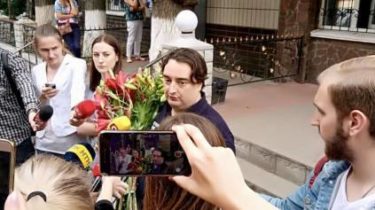 The Kyiv Prosecutor’s office in the court of appeal to appeal against the measure, which was elected by the Shevchenko district court of Kiev the head of the Internet edition “Страна.UA” Igor Guzhva.

This is stated in the message a press-services of capital Prosecutor’s office.

For Guzhva made a half-million pledge his Deputy

Prosecutors disagree with the court decision regarding the size of the Deposit: they consider it insufficient to ensure proper procedural conduct of the suspect and want to increase from 544 thousand UAH to 3.2 million.

Now the appeal of the Prosecutor’s office sent the Appeal court of Kyiv for decision-making.

We will remind, in the evening of 22 June, the chief editor of the newspaper “the Country.ia” of the Igor Guzhva was detained. According to Prosecutor General Yury Lutsenko, Guzhva received 10 thousand dollars to not publish the dirt on one of the politicians. According to Guzhva, a month ago, the people Deputy from the Radical party Linko offered him money for the placement of materials on the conflict of molting and the adviser to the interior Minister Ilya Kiva. Guzhva says that he refused the money. The Shevchenkovsky district court of Kiev chose the Guzhva a measure of restraint in the form of the contents under guards with the ability to make 544 thousand hryvnias of pledge.