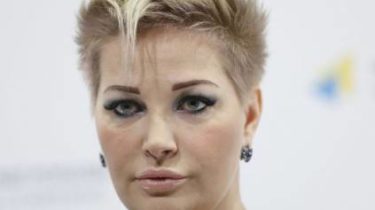 The widow of former Russian Deputy Denis Boronenkov Maria Maksakova said that the killer of her husband – crime bosses associated with the “gang of absalikov” from the Dnieper . This writes the Russian TV channel “Rain”.

Maria Maksakova argues that he does not consider her husband’s murder a political one.

“Putin did not need a murder,” she said.

Widow Boronenkov now doubts that the former head of the security service of the FSB Oleg Feoktistov gave the order to shoot her husband and believes that this “gift” he gave an unnamed criminal authorities.

Possible granddaughter of Stalin and an enemy of Russia. What is known about the widow of the murdered Boronenkov Maria Maksakova

“The trail goes to the Russian criminal authorities, which “are protected” now by the very same people of which I speak,” says Maria Maksakova, without naming names.

The widow believes that these crime bosses came on a gang of killers who, as it turned out, were included in a large “group of absalikov” in the river, which has its ties with Moscow.

The defendants in the murder case are killed the killer Paul Perchov, his close friend Jaroslav Levenets, who disappeared after the crime and is wanted, and the driver Yaroslav Tarasenko, who drove the killer to the crime scene. The last is in custody.

Reporters noted that Levenets and Pursov took place in the case of the Konvertatsionny center in the river. With 4 companies from 73 in this scheme were associated Levenets and Parsow. “Rain” is associated with one of the Directors of the companies of the group. Sergei Chaika, the nominal Manager of twenty firms, said that in the winter of 2014, he and the other Directors, the heads of the “gang of absalikov” tried to hide in Moscow, when they begin to have problems with law enforcement. Supervised the operation allegedly curator Vasily Gerashchenko, who had contacts with the Moscow businessmen.

The version of the criminal authorities allegedly considered as priority and the people around Boronenkov. The source of “Rain” close to the environment Maksakova, says that Voronenkov and dealt with Absalom, and after moving to Ukraine for him left large debts to Russian friends.

“He went to all and collected 50 thousand dollars”, — said the interlocutor of the channel.

Parsow was wanted from 2011 year for financial fraud committed in collusion with a group of people. the people’s Deputy Anton Gerashchenko said that the killer Boronenkov in early 2015 on foot crossed the Ukrainian border with Belarus, and from there went to Russia, where she studied at the school of saboteurs. After the preparation was abandoned in the Ukraine, where he joined the National guard.