In Australia, the man caught a huge crab, almost lost a finger 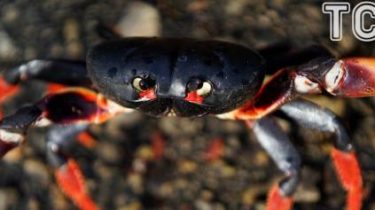 In Australia a man with his bare hands caught mangrove crab and published a video in its Facebook.

Australian Bo greaves to get a crab dug in the swamp a huge hole. He took the stick and climbed head first into the hole on the belt. One hand with a stick he frightened crab, and the second caught. This man almost lost a finger.

The instinct of reproduction: in Cuba, the millions of crabs come ashore

“Made two bites, nearly lost his finger, almost hurt the wrist, but apparently the more that do, the better it goes”, – he wrote.

We will note, some days the video attracted more than a million views.

Another solid muddy up in the holes using my decoy stick, tried to explain it a little bit how to get them out. Been bitten twice, nearly lost a finger and been close to having my wrist crushed, but I guess the more you do it the better you get at it. Few little tricks to help the big part is where to look for them! Maybe one day I’ll get the time an make a little video. Good fun, get out there and give it a go! (It’s illegal to use a crab hook in QLD I guess if you can get one out like this you earned the feed). To use this video in a commercial player or in broadcasts, please email [email protected]

We will remind, earlier it was reported that at the airport in new York a dozen crabs made an epic escape from the Luggage.