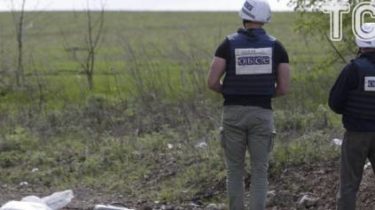 Special monitoring mission of the Organization for security and cooperation in Europe (SMM OSCE) said that the “LPR” threatened to shoot SMM monitors for the congratulations of the residents of the village of Vesela Hora on the Day of Constitution of Ukraine.

This is stated in the report as of 19:30 on 29 June, published today on the OSCE website.

Observers reported that in under control to fighters “LNR” the village Merry Mount to cars, the SMM was approached by two members of the “LPR”, who were armed with Kalashnikovs, wearing grey camouflage clothing with no insignia and were wearing black balaclavas that covered their faces.

It said that the patrol, the SMM left the area and informed about the incident by the Joint center for control and coordination.