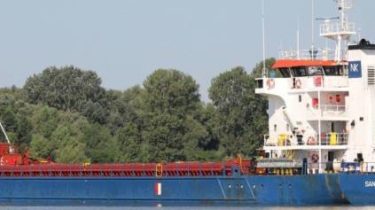 Ukrainian border guards stopped in the waters of the Danube river, the ship San Porfyrios under the flag of Belize, which came in closed the ports of the annexed Crimea.

“The ship “SAN PORFYRIOS” (flag of Belize) was stopped by border guards of the Odessa marine guard detachment of the state border service in the Ukrainian waters of the Danube river EN route from Romania to Greece,” – said in the message.

As told by the guards, they have recently discovered facts of violation of the prohibition on entry into closed ports in the occupied Crimea another foreign ship overseas route.

“Despite the fact that the ship has changed flag and name, trying to confuse law enforcement agencies, the border guards carefully monitored the path of the vessel unique vessel identifier (IMO), which remains associated with the hull of the ship during the entire time of its existence irrespective of changes of name, flag or the owner,” – said in gpsu.

According to preliminary data, the ship called Sava Lake under the flag of Panama and, thereby, IMO, which carries on Board the San Porfyrios, during the 2014-2015 repeatedly went to the temporarily closed ports of the Autonomous Republic of Crimea.

During the inspection of the vessel, the marine security guards discovered archival documents according to which the boat repeatedly went into closed ports of the Crimea.

“At that time the vessel was managed by another captain, and the crew has changed several times. However, one of the assistant captain was twice in the ports of the Crimea on this ship, and therefore was in violation of the legislation on VOTE (temporarily occupied territory of Ukraine – approx.ed.)”, said the guards.

Now all the detected violations are recorded, collected copies of supporting documents for the legal assessment they will be transferred to the Prosecutor.

The assistant captain who broke the law on VOTE issued the prohibition of entry to Ukraine for 3 years.

Recall, November 30, 2016 near Reni port to the State border service of Ukraine in a joint operation by the military Prosecutor of the southern region of Ukraine detained a Tanzanian ship Sky Moon. To detain the ship, the guards had to make difficult tactical maneuvers. Note that during a search border guards found on Board all the documentation that is evidence of violations of international law.

March 15 decision Malinovsky district court of Odessa the captain of a foreign vessel Sky Moon was convicted of moving outside the Ukrainian customs border from the territory of Crimea 3 thousand tons of technical soda. Thus, the state should be confiscated contraband worth 18.5 million UAH. Also decided to confiscate a vehicle in which the offence was committed.