Tillerson hopes for a cease-fire in the Donbass 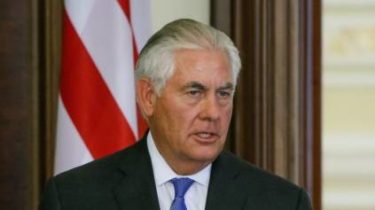 U.S. Secretary of state Rex Tillerson hoped that the countries of the “Normandy format” in cooperation with the United States can achieve progress in resolving the situation in the East of Ukraine, first of all, in achieving a ceasefire.

He recalled that the US administration appointed a special representative of the Ukrainian settlement of the former U.S. Ambassador to NATO, Kurt Volker.

“Kurt is a very experienced Ambassador, diplomat, versed in the situation in the region, he knows very well Russia,” – said Tillerson.

The state Department expects active cooperation with the authorities of Ukraine and Russia, and with other members of the Normandy format. Tillerson also clearly outlined the position in relation to Russia in this matter.

“We were very consistent about our message to Russia that the Minsk agreement must be executed, otherwise nothing can be done in a situation with the sanctions, “said U.S. Secretary of state.