“As agreed”. Poroshenko reacted to the introduction of US sanctions against Russia 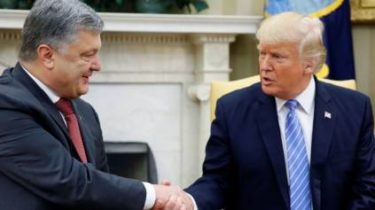 The President of Ukraine Petro Poroshenko congratulated Ukrainians with the signing of a new package of US sanctions against Russia.

He stressed that he will relate to restrictive measures, including the gas pipeline “Nord stream-2”.

“As we agreed in Washington, the Congress voted, and President Donald trump signed. Penalties apply including politicized project “Nord stream-2 “. They will act until complete liberation of Ukrainian lands. It reaffirms the strategic direction of relations between Ukraine and the United States,” wrote Poroshenko in Facebook.

Congratulations to all with the signing of a new package of sanctions of the USA against Russia! As we agreed in Washington, the vote in Congress…

As previously reported, on August 2 President of the United States Donald trump signed the sanctions bill to impose anti-Russian sanctions. The document not only introduces restrictive measures, but also restricts the ability of trump to ease the sanctions against Moscow.

Even before the approval of the restrictive measures of the Russian Federation announced that from 1 August discontinues the use of the U.S. Embassy in Russia of all warehouse premises in Moscow and cottages in the Serebryany Bor and called on the US to reduce the number of employees depodesta on the Russian territories to 455.

Videoamerican-Russian relations can deteriorate as a result of sanctions against Moscow, Washington