Day of airborne forces in Kiev: the paratroopers abandoned the tradition of bathing in the fountains 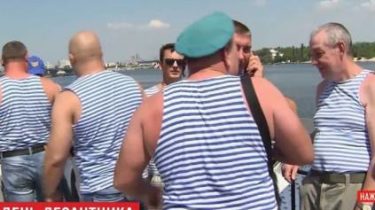 In the capital, the Marines celebrated the day of airborne reserved. The soldiers say that the tradition of bathing in the fountains and misbehaviour rooted in the past and now more associated with the behavior of the soldiers of the aggressor country, which the defenders of Ukraine does not want to be, says the story TSN.19:30.

In Kiev, the event started early with a traditional flower-laying to a monument to soldiers-Afghans near the Kiev-Pechersk Lavra. There, the veterans took part in the service in the so-called “Afghan” Church. Tradition is meeting Marines of different times near the monument to soldiers, after which usually began celebrations with a dip in the fountains. But from 2014 Ukrainian airborne soldiers dissociate ourselves from this habit. Even despite the insane heat, the paratroopers decided to go cool on the Dnieper, not to put entertainment in the city centre. Explained that it is a tribute to the fallen brothers and those who are just now in the Donbas protect Ukraine from aggression.

Videomovie customs: in Kiev the Day of airborne troops celebrated without the traditional bathing in the fountains

So the city did not observe the drunk and aggressive men in striped shirts. The celebration took place calmly and cultural Marines together with their families, wives and children, went on a boat ride on the river. “Already we had our formation. Has a new high-mobile landing troops. And there are new characters, new tactics, new strategy”, – explained the military. “A paratrooper is all about. Tonight we dance, then fight, then rest. We are a nation with a rod. Though we are small, but the spirit will vanquish any,” say the veterans of the airborne forces. Loud holidays and promised to spend, but after the victory in tereni war.

As previously reported, Ukraine celebrates the day of airborne forces. From the first days of the anti-terrorist operation, the warhead was not the only one that comes with a contract and had combat capability, so the Marines take part in the ATO from the very beginning.