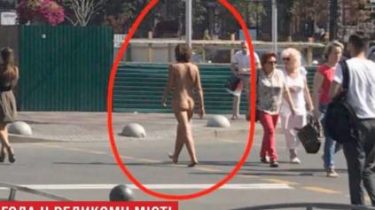 A woman without clothes walking day in the center of Kiev. Her first photos started appearing on social networks at 10:00 a.m., according to a story TSN.19:30.

Videoinside that Nude was walking in the center of the city, was taken to a psychiatric hospital

An hour later she dropped the camera in Victory square. If you count this route, the woman has been almost 4 km and no one stopped. The police intervened only in Victory square, when a woman crossed the road in the wrong place. Cops say that the detainee was in a poor condition. It had to be taken to a psychiatric hospital.

“The police stopped a citizen and immediately offered her a reflecting vest to a woman to be able to somehow cover up his naked body. Also, the inspectors patrol police gave citizen to drink the water because it was very hot. Patrol called to the scene of the emergency psychiatric care team. The doctors arrived at the scene, confirmed the speculation of the patrol and the woman needs immediate psychiatric help and she was hospitalized”, – reports of the patrol police of Kiev.