Savchenko admitted that worked in the phone sex 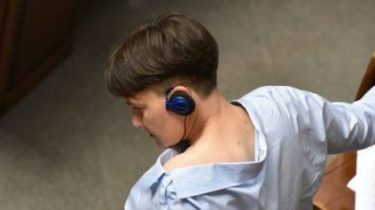 The people’s Deputy Nadezhda Savchenko spoke about his unusual way of earnings – at the age of 21 policies worked in phone sex. This she said in an interview with “Commander in chief”.

Savchenko claims that were able to get through “appropriate attitude”.

Savchenko about his personal life: come to me only men

“This work can withstand not everyone, I saw it on the selection. My friend and I were looking for a job, saw an ad in the newspaper: “the girl with a pleasant voice, with the ability to talk on any topic”. I didn’t know what it is. Arrived there, they gave me a Shocker, told me to read on MIC sex scene. At first I mentally laugh at that. A lot of girls who tried out, was in shock, went out, few people could read it. I said to myself: “you’re an actress, you’ll read this”. Read” – says the people’s darling.

She added that at that time received a good fee for such work.

As previously reported, recently the people’s Deputy Nadezhda Savchenko came to Parliament in a shirt with dropped shoulders, and during a meeting showed someone the middle finger.