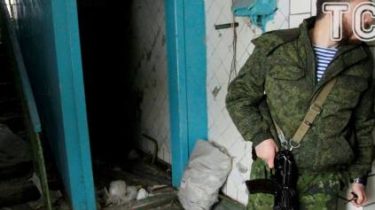 In the occupied territories of Donbass of military units 1 and 2 of AK armed forces fled the Russian mercenaries, the command tried to detain the deserters.

“On the territory of Donetsk and Lugansk regions introduced a plan to “Ring”, which involves placing additional checkpoints on the roads and along the uncontrolled border of Ukraine with Russia”, – stated in the message.

According to scouts, the Russian military servicemen and employees of the so-called “interior Ministry” who will be involved in the implementation of this plan, are allowed to open fire in case of failure of their claims.

In addition, it is reported that in one of the military units 2 AK introduced “the order of transmission equipped with advanced positions” during the rotation for a reward.

“Set the rate for single dugout (checkpoint) is 10 thousand Russian rubles. In case of failure of the newly arrived units to pay money “for comfort,” fortification equipment is destroyed by blasting,” – said Ukrainian soldiers.

Recall that the FSB is looking for dirt on the leaders of the militants in the Donbass to replace them with Russian officers. Already ousted from his post three battalion commanders.