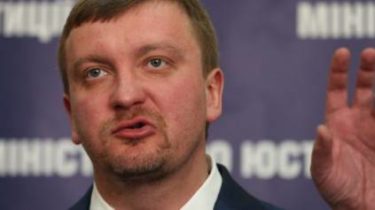 International companies will join the construction of the Kerch bridge into the occupied Russian Crimea fall into the sanctions list. This opinion was expressed by the Minister of justice of Ukraine Pavel Petrenko.

According to officials, in case of participation in the project of the occupier, companies risk their business.

“I think that everyone who will be involved in the construction of the Kerch bridge, will fall under international sanctions. And it would be a clear signal. No self-respecting international company, even a bolt or nut will not put there because she runs the risk of losing your business in the EU, USA, Japan – the countries which joined sanctions against Russia regarding the Crimea. These sanctions also prohibit companies to supply any equipment”, – quotes “Observer” quote Petrenko.

The Minister cited example with the company Siemens, which fell into scandal after the transportation of the turbines to the occupied Peninsula.

Petrenko said that the prospects of construction of the Kerch bridge, in fact.

“Russia can’t build and smaller-scale infrastructure. Know that after the Olympics in Sochi have already begun to crumble the entire stadium. Therefore, I think the best tool in this situation – sanctions against companies, which have been so short-sighted to join this project”, – he concluded.

Earlier it was reported that the European Union could take a decision on the introduction of new individuals and companies from Russia to the black list, which is subject to the EU sanctions. It is connected with the supply of turbines, the German industrial concern Siemens in the occupied Crimea.

ВидеоReuters showed the controversial turbine Siemens in the Crimea