“In many men, nothing but an animal, do not see”: Savchenko explained why she was lonely 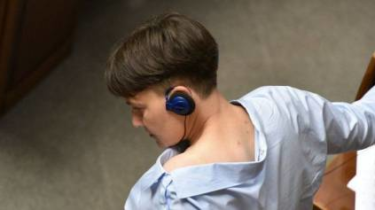 The people’s Deputy Nadezhda Savchenko said that she has no physiological needs in a man.

She said this in an interview with the Commander in chief.

“There are women who can’t live without a man. I have no such. I have on a physiological level is missing. In many men, I’m nothing but an animal, do not see” – said the Deputy.

According to Savchenko, she wants her was a man, who is able to act. She finds that among her colleagues-deputies of these men have.

“Politicians are capable of some work – team or individual. The act is something that goes beyond. When a person goes against the whole world: when it all caved in, and you stand steady. There are no such people in politics” – says Savchenko.

The MP said that she does not know where there are such men.

“I don’t know, very interesting. Such actions are at the front, but there are very few men that can do this, come back”, – said Nadezhda Savchenko.