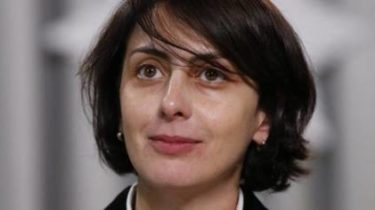 The former head of the National police of Ukraine Khatia Dekanoidze would not return to his post under the current government.

She said this on air of the channel NewsOne, reports State.

“This government – no,” said Dekanoidze.

According to the former head of national police, she is now in Tbilisi, engaged in politics is the opposition party “United national movement”, which was ruling at Mihaila President Saakashvili. In addition, she teaches. In particular, the Marshall Center in Munich.

Speaking about the situation with the deprivation of the citizenship of her colleague Saakashvili Dekanoidze accused the General Prosecutor of Ukraine Yury Lutsenko in duplicity.

“The attorney General Lutsenko said … he [Saakashvili] is one in 2014-2015, but after the incident with the deprivation of citizenship Saakashvili – he says something else. It is hypocrisy, duplicity, which I really don’t like, honestly. And the hypocrisy that democracy in Ukraine will not lead anywhere,” said Dekanoidze.

Faith in the “Misha’s team” and the victory of Ukraine over Russia. That said Dekanoidze in the first interview to TSN.ia

Earlier media with reference to jounalist Nicholas Feldman wrote that Lutsenko has declared its readiness to extradite Saakashvili in Georgia, if he would return to Ukraine. This was attorney General reportedly said at the meeting with bloggers that took place on 1 August.

We will remind, Khatia Dekanoidze took charge of the National police of Ukraine in November 2015, when the head of the Ukrainian government was Arseniy Yatsenyuk. 14 November 2016 Khatia Dekanoidze called a press conference, which announced his resignation. According to Khatia, this decision prompted the fact that the work of the police trying to influence policy.

After leaving the post of head of national police Dekanoidze returned home and regained Georgian citizenship.