In Kiev, the rescue stray cat has become a special operation 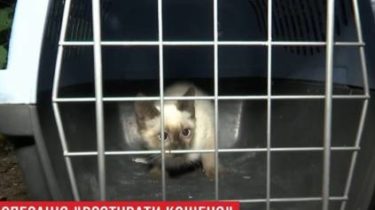 In Kiev held a special operation to rescue the cat. Animal without food and water for a week screaming from under the roof of an abandoned and locked building, and the police could not enter the facility without the permission of the owner, said in the story TSN.19:30.

A local favorite, 3-month-old kitten was stuck in the chimney of an abandoned building. At first people found it difficult to understand why he’s screaming. The building was an impregnable fortress for the rescuers, police and local residents. Animal advocates tried to enter the territory and rescue the kitten, but passers-by thought the looters – and called the police. Law enforcement officers say that without the presence of the owner of the building, any attempt to enter the territory would be a violation of the law.

The building is on balance of the Ministry of education. Call the hotline journalists could not. Meanwhile, one of the rescuers at your own risk climbed onto the roof and checked whether still alive animal, which a few days in the heat held without food and water. At first he saw nothing, but then had to take a picture of a thin and emaciated creature, vypolzovo to eat dropped food.

When it got dark, the rescuers decide on the operation. How he pulled the cat asked not to disclose. The main result is cat safe. In a high-rise building can finally sleep calmly without Mayanja outside.