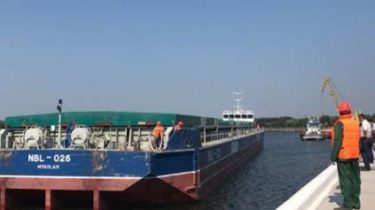 Barge with watermelons, which became an Internet meme and even managed to start their own Twitter, moored in Pereiaslav-Khmelnytskyi. The first in 14 years to swim the Dnieper melons were actively promoted by officials, but Internet users reacted photoshopped pics says the story TSN.19:30.

The pier on the Dnieper near Pereyaslav-Khmelnitsky: the long-awaited cargo, local workers look out in the morning. “Watermelon is the first time,” they admit. Striped flight lasted five days. The porters wear orange vests and helmets. Laughing matter how much watermelon can eat a loader. “Let’s try. How much you give – so much to eat,” they say.

250 tons of watermelons is slowly coming to shore. The men pull the barge to the quay to no watermelon does not slip. But the berries themselves are not visible – they are under a canopy so the sun didn’t bake. The iron roof is moved automatically – the berries you can see. Concerns of users, watermelons will come nadkusannoe not come true – the cargo intact. “The holds were sealed. The team could not go down there,” explains the captain of the tug Vasyl Prydatko.