“You would have sent a mission to Mars, and did not run with sticks”: the Ukraine again zatrolili Russia on Twitter 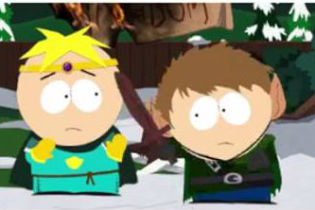 Russia published a video with the folk festival in the suburbs, where re-enactors in medieval armor beating each other. The video was accompanied by the caption in English, “Who to us with the sanctions will come from the sanctions and lost. We dedicate this video to those who are trying to hurt us with new sanctions!”.

Whoever comes to us with #sanctions, from sanctions will perish. We dedicate this video to those who try to hurt us with new sanctions! pic.twitter.com/VdoYI3mK2u

This Twitter account of Ukraine, which is jointly conducted by the representatives of the press services of the AP and the foreign Ministry, wrote: “If you had respected international law, you would avoid sanctions and would have sent a mission to Mars, and not running around with sticks.”

The response of Ukraine is accompanied by GIFкой of the popular American animated series “Sourh Park” where cartoon characters beat each other with wooden sword.