Military aircraft will get 40 units of weapons and equipment – Poroshenko 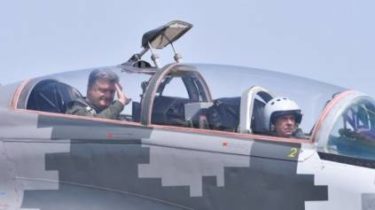 President Petro Poroshenko has congratulated military pilots from the air forces day. The head of state did it in the Vinnytsia region, says the story TSN.19:30.

On the airfield in the village of Havryshivka Poroshenko came on the second place of combat fighter pilot. At the airport he congratulated military and government awards 17th of them. After the ceremony, the aces showed in the sky indicative fights on military aircraft.

This year on upgrading technology at the service of the air force, the state has allocated more than a billion hryvnia. “The restoration of combat capability, maintenance, operation and repair of arms and military equipment of Air Forces of Ukraine allocated from the state budget more than a billion hryvnia. This will allow you to put in the unit more than 40 basic types of weapons, types of equipment,” – said Poroshenko.

Videoporoshenko arrived at Vinnichchina to congratulate pilots on combat fighter