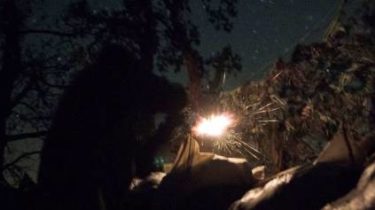 Saturday, August 5, evening in the occupied Sentyanovka the Slavyanoserbsky region of the Luhansk region celebrated the Day of settlement. The rebels turned to the Ukrainian side with a request for silence to the people during mass celebrations. However, they themselves broke the agreement.

“About 18.20-18.45 Russian occupation troops made armed provocations on Ukrainian positions in the Crimean (otoo “Lugansk). The enemy used mortars caliber 82 mm, CNG and small arms. As it turned out, the enemy shelling was conducted from the temporarily occupied territory of the area of the Groove”, – noted in the press center of staff ATO.

Groove and Sentyanovka next door.

“Ignoring all moral principles regarding the discovery of fire, the militants themselves brazenly violated. Ukrainian defenders opened adequate return fire. After a while the enemy stopped the enemy’s fire. As a result of these attacks wounded two Ukrainian defenders. They just were given first aid and taken to a military medical institution”, – is spoken in the message.

We will remind, the film crew of TSN witnessed night raids DRG positions of a battalion.