“I’m happy”. Omeljan reacted to the resignation of Balcona 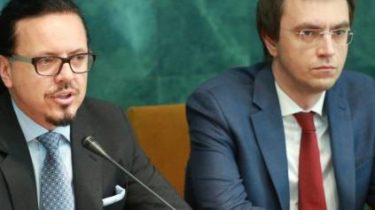 The Minister of infrastructure Vladimir Omelian said that he is happy in connection with the dismissal of the head of “Ukrzaliznytsya” Adalbert Balcona.

The Minister stressed that “the problem is not Balchune personally.”

“Ukrzaliznytsia Ukraine – forever in my heart”: Balcon commented on his dismissal

The official noted that the procedure for the election of the new Director should be as open as possible.

“We did not invite some former unknown performers. And invited professional people who are competent in business today, and are not pensioners or morally or physically,” he said.

Omeljan once again declared the advisability of the return of “Ukrzaliznytsya” to the subordination of the Ministry of Infrastructure.

Later, the Minister wrote that he was going to even drink in the evening a glass of champagne.

We will remind, the head of the state “Railways” Wojciech Balczun wrote a letter of resignation. He was to be considered at today’s Cabinet meeting. This was said by Prime Minister Vladimir Groisman.

The main candidate for acting Director – first Deputy Minister of infrastructure and head of the Supervisory Board of “Ukrainian Railways” Evgeny Kravtsov. It was he, before the appointment of Balcona temporarily led by “Ukrzaliznytsya”.

Groysman hopes that Balcon will remain an adviser to the new head of “Ukrzaliznytsya”. And the reason for the dismissal of the resignation of the head of the government called “the personal circumstances of Balcona”.