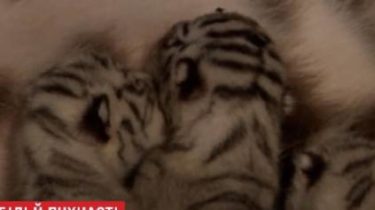 Unique tiger striped with white fur and blue eyes born in Zaporozhye. Birth in Berdyansk Safari Park from four of these kids has become a holiday for zoologists, says the story TSN.19.30.

Girls or boys – not yet known. Mother Azira to children does not admit anybody. While the mother protects the pups, dad is resting. In the morning he was still looking for a wife, and now seems resigned to its absence. A woman the Frenchman was taken right before childbirth. She is now in another cage and will remain there at least a year – the worst in the upbringing of cubs.

Fun games tigers in water and photogenic frogs, Reuters showed how the animals live in a zoo in the United States

“The father is not involved in education, because tigers are not social animals, and in nature, tigers meet in the mating cycle is every three years. And then can not see life,” says the Director of the Safari Park Igor Kalchenko.

The Director of the Berdyansk Safari Park, says during the summer they have a real baby boom. Born lemurs, cats, peacocks. Zoologists happy all kids, however, white tiger cubs delighted especially. After all, their birth was a miracle.

“There were only 200 individuals on the planet. This is one of the smallest types, which is no longer subject to recovery,” says Igor Kalchenko.

After 18 months the mother will expel the children, so they searched for food and lived separately. But until then, will not be admitted to the cubs one. Even his own father.