“Ukrzaliznytsia Ukraine – forever in my heart”: Balcon commented on his dismissal 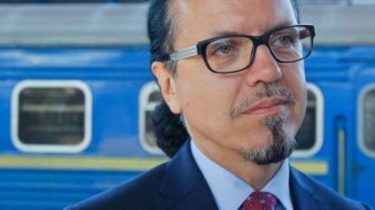 The head of the state “Railways” Wojciech Balczun that today, August 9, wrote a letter of resignationfor the first time commented on his decision.

Balcon noticed that it was the most difficult and most important mission in his business life. Indeed, in Ukraine to the post of the head “Ukrzaliznytsi” it was only once.

“Other corporate culture, legal environment, customs and a different language. Winning the competition was for me a surprise, a challenge and a personal test. There will be a time to talk in detail about my achievements,” wrote Balcon.

He also spoke about the improved financial condition “uz”, noting that under international financial reporting standards, net profit amounted to 122,5 million. Over the same period in 2016 was decreased almost 3.8 billion.

He also noted that from the beginning it was known that his mission will not last forever. “I knew that in the first place, on my shoulders will fall the burden of organizing the process of handling the firm. The situation that I found was much more complicated than anyone imagined. A few months passed very quickly,” said Balcon.

He concluded that his team stabilized the company, improved all economic indicators, has developed a five year strategy that restored the company’s reputation in the international arena, has returned to the path of investment, has launched a new passenger service.

“But things never happened, which is natural, considering the extent of the problems of Railways. And we will not at this moment to talk about the bad. Better the good, and here I must say that I owe the support of the Prime Minister Groysman, first Deputy Prime Minister Stepan Kubiv, Deputy Prime Minister Cistina, Chairman of the Supervisory Board of ULTRASONIC Kravtsov. Daily criticism was also for me an extra motivation,” he added.

Groisman spoke about the future of Balcona

In addition, Balcon thanked all Ukrainians. “I always had full support from my family in Poland, but invariably a key element of my life here was tight for the family, which was forced to accept the consequences of my international mission. Today I Express my gratitude to all Ukrainians, who every day gave me personal words of support,” he commented.

Balcon said that will keep my fingers crossed for a new team of “Ukrzaliznytsya” for further reform and, for its part, will do everything to implement the projects of the company in international markets. “Ukrzaliznytsia Ukraine – forever in my heart,” he concluded.

It was( the most difficult and most important mission in my business life. A country where, before, I was only once. Other corporate gifts…

Recall, Balcone had a conflict with their direct supervisor – Minister of infrastructure Volodymyr Omelyan. Balcon constantly talking about improving the company, and Emelyan were all questioned and told about the loss. Come down to the fact that “Ukrzaliznytsya” had been placed under the direct subordination of the Ministry of Infrastructure. Informed by Omelyan expressed the hope that as quickly as possible the resignation of Balcona. According to him, on June 5 of this year in Balcone over the term of the contract and he should go for something that does not live up to expectations.

In turn, Balcon previously stated that, in the case of non-renewal of contract “cream from reforming Railways will gather another head of” because “is often the one who takes on this job will not be able to stay in the company until the moment when you see the result.” Recently Balcon caught Omelyan on incompetence. Balcon believes that statements about the resignation of the leadership of the institution Omeljan covering for their own incompetence and lack of professionalism.

More April 20 Omeljan declared readiness to vote for the resignation of Balcona. According to the Minister of infrastructure, had three candidates for the post of head of “Ukrzaliznytsya”. In particular, among them former railway workers and Western experts, but he did not name names. Earlier, the head of the Ukrainian government Volodymyr Groisman has publicly supported the head of “Railways” in conflict with the Omelyan.