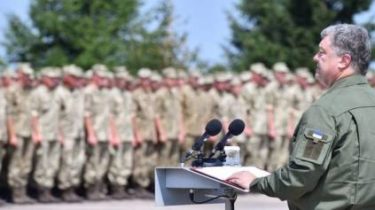 The President of Ukraine Petro Poroshenko presented state awards to more than 48 soldiers of the APU and machardie of Ukraine.

Kobets was the gunner of a platoon from October 2016 in the part of the 137-th separate battalion of Marines of the Navy. He performed combat missions for the defense of Ukrainian borders in the area Chermalyk Donetsk region have served on the front lines. 3 June 2017 at the reference point position of the landing-assault company Kobets came under artillery fire and were injured, incompatible with life.

The medal “Defender of Fatherland” was awarded the senior soldiers Igor gaidaichuk, which has been serving as a senior vagamente 72-th separate mechanized brigade of Land in may 2016.

During the defense of the Town on 11 November 2016 at the platoon-strong point of our soldiers in the area “Industrial zone” the enemy began shelling that covered the nomination of the Russian saboteurs. During the battle gaydaychuk killed one and wounded two militants, but received a gunshot wound through the leg. He put his harness and continued the fight, and was subsequently evacuated.

We will remind, earlier the President of Ukraine Petro Poroshenko awarded the order “For courage” of the Ukrainian pilot Alexander Akopov, who in extremely difficult weather conditions saved the lives of 121 passengers and 6 crew members in Istanbul.