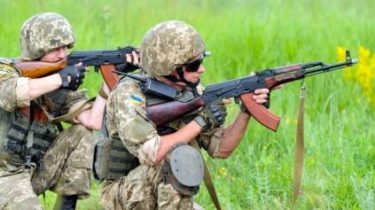 In the past days in zone anti-terrorist operation killed one soldierwho was blown up on a mine, another 9 were injured.

This was at the briefing said the speaker of the Ministry of defence of the ATO Andrei Lysenko.

According to him, it was as a result of shelling injured six soldiers.

The rebels were beaten shells on residential areas Novoluganskoe

“Over the past day by fighting the dead in the ranks of the Ukrainian troops there, six soldiers were injured, it happened as a result of enemy attacks. Yesterday as a result of explosions of explosive devices killed one soldier, three more were wounded”, – Lysenko told.

As previously reported, the head of the State border service of Ukraine Petro Cigital said that Russia has strengthened control on the border with Ukraine in the area, which is under control of illegal armed groups of certain regions of Donetsk and Lugansk regions (ORDA).