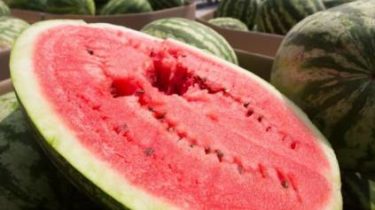 In Ukraine in the scorching sun stung watermelons. Due to the incredible heat of the Kherson farmers this month had less than high-quality crop. Hence, prices rose plantation.

But berry is. It has traditionally boasted at the Festival of Ukrainian watermelon. As always, the festival staged in the city Naked Pier, Kherson region. For the people there – tasting, fairs and fun.

In this year’s watermelon festival is much less than always. And the problem is not the barge that brought a large portion of watermelon in Kiev, and in too high a temperature. The owners of the plantations complain that due to the insane heat in the fields, the watermelons just burn.

“It Vergara. The watermelon needs to be 20 degrees at night and 28-30 in the afternoon. And we have the surface temperature of sand reached 60 degrees. That is to stand on the sand without shoes is impossible. Of course, the watermelon lies on the ground,” – said the head of the farm Yuri Pokotilow.

“Early watermelon has moved, the average burned at this temperature. We now expect late watermelon, it will be the end of August – beginning of September”, – said the Director of Department of agroindustrial development of Kherson regional state administration Alexander Palivoda.

The heat had an impact on melon records. This year the winners – too small. The heaviest watermelon weighed a little less than 18 kilograms. This is when last year’s Champions have reached as much as 40 pounds. But on the category of the “least” Jack – o ‘ – the heat has not affected: 32 grams against last year’s 42 grams.

Melons in the stands, and trucks is already a thing familiar to guests of the festival. So next year farmers want to invite people somewhere in the village – so that buyers can see how the plantation grows, and buy sweet berries right from the field.

More details see in the story of Elena Vanina.