The fighters beat on Ukrainian positions with mortars and infantry fighting vehicles, one soldier was killed ATO 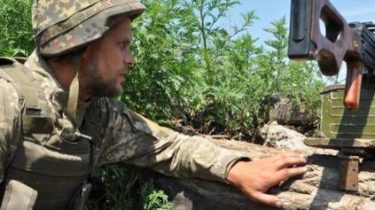 Over the past day in the Donbas remained stable situation, without deteriorating. In General, fighters 17 times violated the truce. One Ukrainian soldier was killed and two wounded, 6 got a combat injury.

“Last night, in the seaside area of the militants from rocket-propelled grenades and heavy machine guns beat on the Ukrainian fortifications near the Water, and getting a hard answer. As a result of this confrontation, one Ukrainian soldier was killed and one wounded”, – noted in the headquarters, adding that at night the bandits used a mortar of calibre of 120 millimetres in the area Novotroitsk.

At the same time in the direction of Donetsk under the grenade fire of the enemy came Ukrainian strongholds in the experimental, and the mine Butovka beat from APCS.

“At the Lugansk direction of attacks per day was more likely. In the evening, twice with machine guns, the enemy shelled the approaches to the Crimean. And from mortars caliber 82 mm, the criminals were covered by our fighters near Novotoshkivske, Novoaleksandrovka and Katerinovka. The militants actively used mortars of various calibers in the area of the Trinity,” – said the headquarters of ATO.

In addition, according to the military, in the temporarily occupied territories of Donetsk and Lugansk regions growing protests among the residents of the settlements, which are the garrisons of the Russian occupation forces.

“Using the power of the chiefs of garrisons illegal documents for the assignment of houses of citizens who have left their homes since the beginning of Russian military aggression. In particular, in Novoazovsk, the leaders of the so-called 9 separate assault infantry regiment of Marines, seized and resold more than a dozen suburban buildings located near the sea shore,” – concluded in the headquarters.

Earlier, the militants set fire VSU positions near Avdeevka. The military shot back and extinguished the fire.