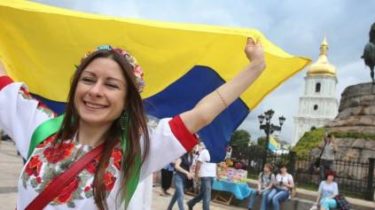 In KCSA told what the event was prepared for the 26th anniversary celebration of the Independence Day of Ukraine.

August 24 from 13:00 to 17:00 on the Summer stage of the City garden (“Shell”) in the Central Park of culture and recreation will host the main cultural and artistic event “the Mother of Ukraine, you are one of us” with participation of creative collectives of ethnic communities in Kiev. There’s also the evening of 24 August (18:00) will start the big concert of creative collectives of municipal. This art event has become a tradition and will be held in other city parks – water Park, them. Rylskyi, “partisan glory”, “Victory”.

On the left Bank of the Dnieper on August 26 from 17:00 to 21:00 in Park “Victory” will be a professional pop and Opera singers, students of circus and music academies, choreographic collectives of the districts of the capital.

In Kiev from 23 to 25 August will be held art festivals. And the Ivan Honchar Museum at the fair of folk art will be available for viewing and purchase pottery, embroidered clothes, shoes, and socialise with folk artists, and to attend master classes.

Independence Day at the Postal square will take place festival “the Crimean house unites the hearts”, during which will perform the Crimean Tatar artists. Will run master-classes for children and adults, workshops, a food court area of the national Tatar cuisine, photo exhibition, exhibition of children’s drawings, installations and themed photo zone, dedicated to the Crimea and Tatar people.

From 22 August for all those wishing also an exhibition of modern weapons and military equipment, dedicated to the 26th anniversary of Independence of Ukraine (Khreschatyk street from Instytutska street to the European square) and an exhibition of historical equipment, dedicated to the 100th anniversary of the UNR Army. (European square, the facade of the “Ukrainian house”). Another spectacular event these days will be a regatta in sailing.

There will also be a traditional race embroidered on rusanovskaya embankment.

Cultural and artistic event devoted to the independence Day of Ukraine

The territory of the Pechersk landscape Park

Exhibition of modern weapons and military equipment, dedicated to the 26th anniversary of Independence of Ukraine

An exhibition of historical equipment, dedicated to the 100th anniversary of the UNR Army.

The European area, part of the facade of the Ukrainian house

Exhibition of historical facts, devoted to the Independence Day of Ukraine and the historic premiere of the documentary film “Ukraine. The return of history”

Solemn presentation of passports of the citizen of Ukraine of sixteen young men and women of the capital who have achieved significant success in education, sports, arts

Events on the occasion of Day of State flag of Ukraine and the Gala concert of “Ukrainians in the world” with the participation of dance groups Argentina, Canada, Poland, USA, Ukraine

All-Ukrainian festival-contest “You’re in my heart, Ukraine!”, devoted to the independence Day of Ukraine

The ceremony of laying flowers to the monuments to Taras Shevchenko, Mykhailo Hrushevsky. Honoring the memory of Heroes of Heavenly Hundred on Instytutska street.

The prayer event at St. Sophia Cathedral of the National reserve “Sophia of Kyiv” and other churches of Kyiv.

A celebration of the arts on Andreevsky descent

Cultural and artistic event “Independent and only native Ukraine”

Event on the occasion of Independence Day of Ukraine “dreamboard”

Regatta sailing, dedicated to the independence Day of Ukraine

Regatta sailing, dedicated to the Independence Day of Ukraine

Central Park of culture and rest in Kiev

The waters of the str, 6th berth of river station

The waters of the str, 6th berth of river station

National-Patriotic festival “the unity of the twin cities”

National Museum of folk architecture and life of Ukraine on the territory of S. Pirogov

Park of culture and rest “Victory”

We will remind, on August 24 held a military parade for independence Day. Participation in this parade will take over 3,600 Ukrainian military. Also on the main street of Kiev for the first time, will the military units of the countries-partners have already confirmed their participation, the UK, Estonia and Latvia.