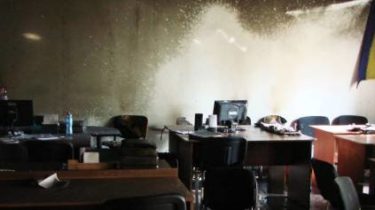 Night office “Kiyevblagoustroystva” was attacked by unknown personswho entered the territory of the municipal enterprise and threw two “Molotov cocktail” into one of the classrooms. The fire was quickly extinguished, but the fire damaged the furniture, office equipment and documents, according to a story TSN.19:30.

The lady Catherine in the morning a bunch of work and have already wiped out a few rags and a jar of cleansing powder. Black soot everywhere – on the Windows, the ceiling, the walls. One of the rooms was absolutely dismal: molten computers, black furniture, ashes from paper documents. “Seven computers, two printers, phone, keyboard, mouse, extension cords” – lists the losses of head of the inspection of utilities Mikhail Abramov. He is the head of the Department, which was set on fire unknown.

Videocassette attacked the office of “Cablerouter”

In addition to furniture, office equipment and air conditioner have missed a heap of documents. “This is my first day of work, but such actions do not scare us,” said the new leader “Kievblagoustroystvo” Andrey Andreev. He connects the attack with the struggle against housing and communal services of illegal buildings and Kiosks in the capital. Over the last three years “Kievblagoustroystvo” demolished thousands of illegal kiosks, car parks, petrol stations, so anyone who wants to take revenge quite long.

The fire burned regulations for the violations and administrative reports on offenders. However, the documents can be restored, assure of accomplishment. The server with the electronic document is in another room. Arsonists, the police are looking for.