Shabunin and Filimonenko, both were dissatisfied with the decision of the court 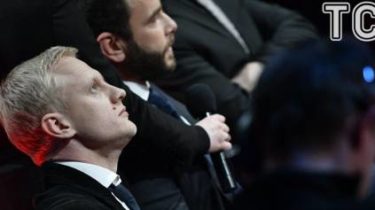 The Chairman of the Center of counteraction of corruption Vitaly Shabunin is obliged to inform investigators about changes of place of work and residence. This measure for the next two months, sentenced him to court for beating blogger Vsevolod Filimonenko in early summer, says the story TSN.19:30.

The victim said struck one blow – its consequences called the “beating of average weight” and the Filimonenko law enforcement officers recognized journalist. Therefore antikorruptsionera could face 5 years in prison. “I trained with Yatsenyuk in Chechnya. With a single blow” – ironically said. He explained his aggressive behaviour to the fact that the blogger was brought to tears by his colleague claims to rest abroad during the ATO.

Videopresenter of the anti-corruption chose a measure of restraint

Filimonenko meticulously tracked the activities of the Center for combating corruption – were looking for a state-of-the Shabunin, watched him under the house, figured out why he’s not in the ATO, at 6:00 am was met at the airport by an employee of the Center to ask if she is not ashamed to fly on vacation until the war. After the incident with Sabumnim himself Filimonenko, who hails from Lugansk, left also not in the ATO, and to receive medical treatment abroad. “Fracture of the maxillary sinus is just above the jaw, the same jaw bone. I had a concussion,” says the blogger.

The damage is not immediately put the blogger in a hospital bed after the beating, he waited for her abuser and sprayed it, as well as journalists who were there, from a gas canister. And he said, and journalists wrote Filimonenko statements to the police, but had received only the complaint of the blogger. The Prosecutor such selectivity has not commented.

Guilt said partially admits. Suggests that beaten ascribes to extra damage, and wonders why it found a fracture on the left side of the face, if the blow fell on the right. “The fact that I hit the person is. I admit it, but I did not hit a journalist, and provocateur, defending his colleagues,” – said antikorruptsionera. There are, Filimonenko, journalist – the question is not empty because for any journalist in the performance of the harm of punishment is significantly higher than for the same – not to the journalist. In the online edition, which Filimonenko pointed out the place of their work, none of the material. “And they have to be there? Some materials appear, but they are not an obligatory condition of our cooperation with the publication,” explains Filimonenko.

Something about the professional background of the victim and worried investigators – per night business retrained, and Filimonenko it is no longer a journalist. Article sanction was reduced to 3 years in prison. Dissatisfied with the court is left with both the blogger that he was not recognized as a journalist; antikorruptsionera that the case against him specifically untwist, to put pressure on the Center of counteraction of corruption.