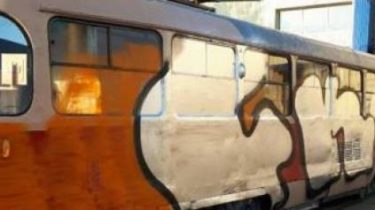 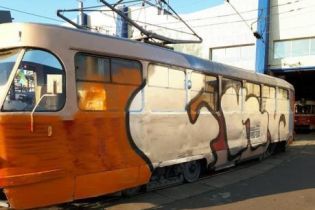 It is reported, the Kyivpastrans.

According to the report, unknown persons in masks blocked the road, when the driver tried to find the reason for such action, he sprayed in the face with paint.

After this, the attackers painted the car, now it requires restoration and is now withdrawn from service.

“This is a very shameful situation when unknown persons stopped the tram and harm not only transport, but also to the driver. Moreover, due to such illegal action affects passengers – because the tram is removed from the route, and traffic will be delayed. I hope that the police will force vandals to answer to the community,” – said General Director KP “Kyivpastrans” Dmitry Levchenko.

Meanwhile, the investigation of the incident involved the Metropolitan police.

We will remind, in Kiev about 50 people in masks and with bits stopped the train and painted it. It is noted that station. George Kirpa few dozen people in masks, some of which have been with bats, delayed the train, which followed from the Chasers to the capital.

“Men with bats and threatened the locomotive crew and not allowed to get out of the cab, burning on the platform, smoke bombs, painted cars and shot everything on video. Also, do not let the passengers from the coaches. During the event the railroad called the police, Vohra and SBU”, – is spoken in the message.

The police arrived after the arrival of electric trains to station borshchahivka-Technical. Ukrzaliznytsia also said that the estimated cost of repainting the wagons will amount to 150 thousand UAH and it will take two weeks time.