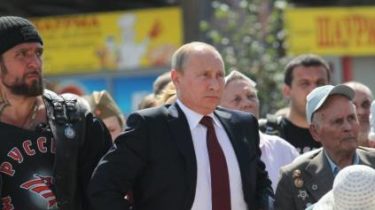 The President of Russia Vladimir Putin is going to go to the occupied Crimea. This was reported by the Kremlin press pool journalist Dmitry Smirnov.

The visit to Sevastopol, the Russian guarantor has planned for tomorrow, August 18. In the occupied city it needs to open a school “Bay Cossack”, to visit the Chersonese and to meet with biker group “Night wolves”.

The sale of alcohol and children’s events. What earn Putin’s “Night wolves”

The program of Putin’s and music festival “Opera in Chersonesos”.

Putin went to Sevastopol: will Open a new school, will meet with scientists in the Museum-reserve Chersonese, to communicate with the “Night wolves” pic.twitter.com/QCNSusiR8Z

It is noteworthy that Putin has met bikers. In 2009, as head of government, he visited the show in Sevastopol, arriving there on the bike. In 2011, Putin arrived to the bike show “Night wolves” in Novorossiysk at the head of a column of motorcyclists. In 2012, he was four hours late for a meeting with the then President of Ukraine Viktor Yanukovych in Yalta, the first thing going to the base of the “Night wolves” in Sevastopol.

Earlier it was reported that “Night wolves” for the first time since 2012, the Kremlin has not received grants, although filed at least three applications.