In the Kyiv region in one of the courtyards of explosion, injured spouse 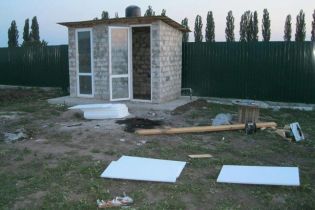 Thursday, August 17, in the village of Peace the couple on the territory of the household revealed a wooden bread bin in the unfinished restroom.

During the opening of the breadbox, worked the explosive device.

The couple received shrapnel injuries. In particular, the 31-year-old man was taken to the hospital, and 28-year-old girl refused hospitalization.

On a scene worked it is investigatory-operative group of the police and explosives specialists.

Remains of the explosive device confiscated and sent for examination.

We will remind, in Kiev in a private house explosion. About 1 a.m., the police received a report of an explosion.

At the scene revealed that unknown persons threw into the yard a subject similar on a grenade “f-1”.

The guard who was in the house told that during the night they heard a strong sound, ran out into the yard and saw the earth opening and shrapnel damaged the facade of the house.