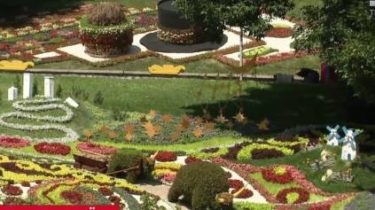 Map of Ukraine from the flowers to the Independence Day posted on the Singing field in the capital, however, few regions have any questions for the authors of the composition. Alert viewers could not see in the colors of the Crimea and the Donbass, says the story TSN.19:30.

Zaporozhye, Poltava, Volyn, Halychyna, Transcarpathia, Podillia, Bukovyna, the Dnieper Polesie, brand is presented in 10 separate compositions. The map is not one image and the zones, each of which have the features of regions. The Crimea can rosseti is in the composition of the brand. “We have the image of the ruins of Chersonesos, that part of Ukraine. The sea around us, sea of green”, say the florists.

Near the flowers there are gastronomic delights. On the tail – lock mugs with wine and dumplings, in Polesie stove and borsch, Volyn – girls in sarpanch and blueberry pie. The Carpathians represent sheep, Bukovina – blooming caps, Zaporozhye Cossack tower. In Zelenstroy note that the map is conditional, because the whole Ukraine just climbed – it took only some of the most bright regions. Therefore, in the absence of the Crimea and Donbas not see a problem and I think the criticism about it being too picky. “A lot of regions, and the territory field is limited”, – explained the organizers.

KSCA officials, who inspected the exhibition was pleased with what he saw. Zelenstroevtsy report that the card was used by 200 thousand flowers. Visitors General the work of florists to taste, but some regrets that Ukraine is not fully provided. “It was written, that will be all region. I don’t see all regions. Simply, very simply. Very little. I thought that would be a card of some kind, something special, and so,” say some guests.