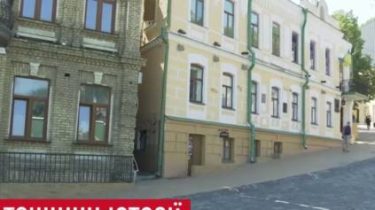 Metropolitan home of the writer Mikhail Bulgakov Andreevskom, where he has lived for 13 years, is bursting. Throughout the building crept long tears, says the story TSN.19:30.

Staff suspect that the cause of the alarming signs of the destruction are construction works opposite the Museum. There on the site of a private house formed the failure of nearly 4 meters deep. “As lift the earth move”, – eyewitnesses describe what they saw the time gap. Peppered his administration has been anti-ground works. Into the abyss, climbed 5 “KAMAZ” land.

Experts say that during the construction of the retaining wall partially destroyed the drainage system. Now there should be a conduit to harness groundwater. Such situations occur when work is being done in violation of the rules and regulations. Andreevsky Spusk is a security area, where there is a clear limit budownictwo: not higher than 12 meters. But the fence is planning something large-scale 7 – story hotel complex with a height of almost 30 meters with underground Parking.

Activists say that such a construction is contrary to all norms. This unfinished since 2005 and runs a series of scandals. Then the Kyiv city administration gave the land lease of the company “Makron”. Five years ago I cut down about a hundred trees, and now broke the drainage system. On the phone, the customer sapena, has all the necessary permits, and the gap, they say, his neighbors did themselves, because they have built toilets and pantry. “Under zemlinoy plot of these gentlemen, which they captured, were organized drains,” says the Director of “macron” Valeriy Pavlyuk. In the Bulgakov Museum, meanwhile, are studying new crack. They put special lights to see, they will spread further.