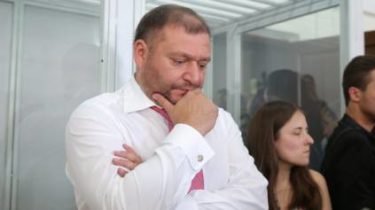 “The measure to remain unchanged. A motion to dismiss,” the judge read.

During the meeting, Dobkin asked the court to release him on personal bond.

“I didn’t break the law on any charges and I am ready to help the investigation so the case was transferred to court”, – assured the MP.

The prosecution, meanwhile, noted that the personal obligation for Dobkin is unacceptable, since he could influence witnesses and destroy documents.

After the decision Dobkin declared that will appeal to the European court of human rights.

Dobkin compares himself to a Somali pirate

We will remind, lawyers of the people’s Deputy from “opposition bloc” Mikhail Dobkin filed an appeal on the decision of Pechersky district court of Kiev about taking him into custody with alternative collateral.

On 29 June the attorney General Lutsenko made a submission to the Verkhovna Rada on granting consent to criminal prosecution, detention and arrest Dobkin. The GPU in the actions of the Deputy saw signs of deliberate arrangement by group of persons for abuse of official position and the promotion of fraud for the purpose of acquiring 78 acres of land Kharkiv regulatory cost of more than 220 million UAH.

13 July, the Verkhovna Rada at its evening session gave its consent on bringing to criminal responsibility, detention and arrest Dobkin. For the removal of his immunity voted 288 deputies from 339 present, it was enough and thus the Parliament has consented to the prosecution of this MP.

14 Jul Dobkin questioned in the investigation Department of the GPU.

On 15 July the court ruled to satisfy the petition of the Prosecutor General of Ukraine Mikhail Dobkin taking into custody. This leaves the possibility of making a bail of 50 million UAH. If within five days for Dobkin’t make bail, will take him into custody, which will last until September 14.