“The point of no return is not passed”. Poroshenko said that can destabilize Ukraine 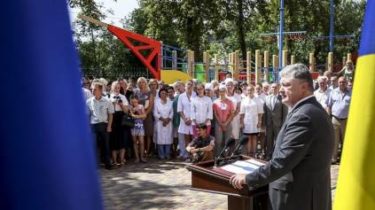 Ukraine has experienced a severe test, but “roll” it back can the aggression of the Russian Federation and destabilizing actions of populist politicians. Such opinion the President of Ukraine Petro Poroshenko announced during the opening of the updated regional children’s hospital in Kropyvnyts’ke.

“I can firmly say – the hard part is over. The country withstood these tests. The Ukrainian nation with honor have demonstrated their ability to unite, to confront the aggressor and in war to ensure the effective development”, – quotes the head of state’s press service.

Hrycak reveals a new scenario of Russia to destabilize Ukraine, according to which “play” the Ukrainians themselves

Despite this, Poroshenko stressed that “the point of no return” has not yet been passed and return back the Ukraine can at least two things.

“To roll back we can both provoked by Russia, the renewal of the hot phase of the war and the actions of populist politicians who are destabilizing the situation in the country is able to nullify all our efforts. They are willing to lose everything that people have suffered in recent years”, – said the President.

Poroshenko stressed that the actions of the demoralization of society are dangerous.

Also, the Ukrainian guarantor noted the importance of pension reform.

“This is the main position, as after the fall of this year pension reform for the sake of justice. Who has more experience, he should get a large pension. This is normal. That’s right. That there is no alternative,” he said.

We will remind, earlier the Minister of defence of Ukraine Stepan Poltorak said about possible Russian aggression against Ukraine and the EU under the guise of the Russian-Belarusian military exercises “West – 2017”.

“Ukraine and the world have a common vision of possible prospects exercises of the armed forces. The upcoming military exercises “Zapad – 2017″ are extremely powerful. They can be used to start the aggression not only against Ukraine but also against any European country which shares a common border with Russia”, – he stressed.

The defense Minister added that the General staff of the armed forces has provided for measures in case of threat of invasion of Russian troops during the exercise “West 2017”.