Without priests or workers of the registry office: in the Poltava region Bridal marries the Smiths 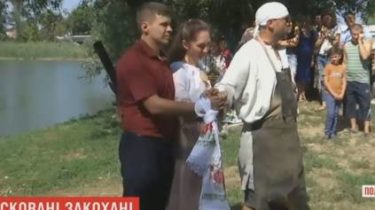 In Poltava the Smiths again conduct wedding ceremonies. Instead of the marriage certificate is forged a special sign – the sun. The merger procedure of the newlyweds is only a quarter of an hour, but to terminate such a Union, say the Smiths, it is impossible, says TSN.12.00.

Bank of the Khorol river, as the blacksmith’s registry office in Mirgorod. For the ceremony endure the anvil and the bellows. Today is the wedding of Julia and Stanislaw. Marry Bridal Vladlen. Perform the ceremony he has the ancient Ukrainian law, because before it was the Smiths to marry the newlyweds could at any time of the day.

According to tradition, the hands of the newlyweds associated with a towel and three tracing around the anvil. Instead of marriage certificate – in the circle of the couple forge their initials and the word prosperity, therefore to forge something so desirable can only be himself.

Videobes of the priests and of the Registrar: in the Poltava region resumed the tradition to get married in the blacksmiths

Believed to leave Yulia and Stas is now impossible – their marriage should become endless as a ring and as strong as steel.

Meanwhile, Smith Vladlen spouses makes a gift – hook. Strong amulet which hung a cradle. Give young to drink wine from the common Cup, and only then are allowed to kiss. After marriage the newlyweds their testimony-the sun does not give up, and hang in the forge. The sun, explain the Smiths, like the pass to visit. Locations for the forged evidence to choose the most honorable.

“They are stored in plain sight and the more people will see the sun, the stronger will be the family,” says Koval.