Cook heroically rescued the parrot in the fire restaurant in Kiev 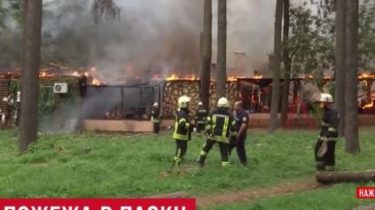 During a fire at a restaurant in capital Park of a name of Pushkin the woman-the cook ran into a burning building to save local pet – parrot. The rest of the visitors and the employees of the institution had to run out early, so there were no casualties, according to a story TSN.19:30.

“At the last moment made. Remember that it’s there – everything was burning,” says cook, who saved the bird.

The fire was long over obstacles: lack of water in the hydrants and the delay with the power outage in the room. Rescue workers pushed people away from the scene because of high temperatures there exploded slate, and its fragments could someone hurt.

Official versions of the reasons of the fire yet. Eyewitnesses say that the source of the fire was the kitchen or the roof of the building. The owners had to endure from the premises some documents and computer equipment. On camera, they did not comment.