In Ukraine went the first 85 thousand tons of American coal 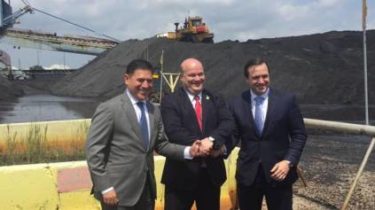 From the port of Baltimore in Ukraine went to the first party of American coal.

It is reported by the Ukrainian Embassy in the United States.

In the ceremony of sending coal was attended by Ukrainian Ambassador Valery Chaly, Facebook conducted a live broadcast of the event.

She should come to the port of Odessa in about three weeks.

Earlier it was reported that the Ukrainian company “Centrenergo” is starting to import coal from the United States. The first vessel with 85 thousand tons is due to arrive in early September in the southern port of Odessa region. Under the terms of the contract before the end of September will arrive the next 120 thousand tons. Overall, by the end of 2017 for the thermal power plant will be delivered about 700 thousand tons of American coal.

It is noted that a continuous supply of coal to American company will allow a fully operational power plant Centrenergo, which in turn will provide a stable autumn-winter heating season in 2017-2018.