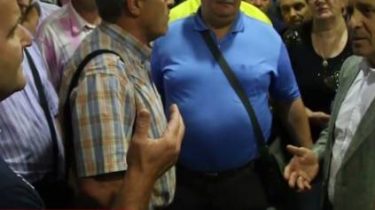 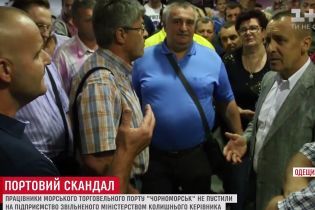 The black sea port tried to return under his leadership dismissed Sergey Kryzhanovsky. He arrived at the company and tried to go to the principal’s office, according to a story TSN.19:30.

At the entrance of the former head met the labor collective of the port, which is also in the spring expressed their distrust. People have stated that they will not let Kryzhanovsky and advised him to go to the capital to the Ministry of infrastructure, which fired an official over the mismanagement – the decline in cargo handling and financial performance of the company.

Ex-Director decided to appeal to court, which restored him to his office. The people that judgement was outraged and came to the defense of the port. So after a failed attempt to log in, Kryzhanovsky left the checkpoint administration. “Kryzhanovsky received the decision of the court. Definition is little in this situation. Here, state-owned enterprise, strategic object, without an order of the Minister, he has to go right. Looted the company – half a billion stolen. This is not enough for them. We have a clear information: Minister, your order will not be canceled,” – said the leader of the trade Union of the enterprise Sergey Bryzgalov.

In the beginning of the month it was reported that the Director of GP “Sea trade port “Black sea” Sergey Kryzhanovsky dismissed due to inefficient management port. “The government of Ukraine and the Ministry of Infrastructure did UNICRI gift to the staff of the black sea port on the eve of the 59th anniversary of its founding! Kryzhanovsky ignominiously dismissed from his post, which he held! Banda “vorovaek” and pseudogregoryceras that robbed the port a year and a half rooted in the past as a black page in the history of the port!”, – wrote in the social network, the Deputy mayor of the Black sea Yuriy Kruk.