“Hyacinth”, “Oplot” and other military equipment on Khreshchatyk made a splash in the capital 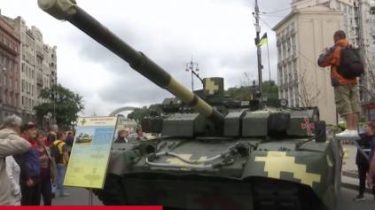 In the morning in the center of Kiev great interest among passers-by called the military equipmentthat was brought last night to be exhibited on the occasion of independence Day of Ukraine. The flow of visitors did not abate all day, according to a story TSN.19:30.

People took pictures and got acquainted with the technical characteristics of weapons, talked about what they saw. Interesting is not dispersed even a good rain – people heard about the exhibition, he broke with cameras even in the middle of the day, someone came in for a lunch break. “Very interesting! The first time I see this technique very close. The pride of power that is in us power is such that everything will be fine,” said one of the spectators.

All the equipment is shiny, but the gloss just for show, because most of these eksponatov first came to the defense of the state border in 2014. The car doesn’t just sniffed the front of gunpowder, but was wounded in battle – for example, “Hyacinth” defended the Luhansk region from the first days of the war and was shot down by the enemy. Now after repair it is again ready to battle and, as promised, immediately after the exhibition will travel to the East. “The 26th Berdichev artillery brigade. Shoots at 28 miles, the caliber of 150 – a terrible thing! It the separatists are very afraid,” says chief engineer Dmitry Bogun.

The star of the exhibition – Ukrainian contemporary battle tank “Oplot”, developed by the Kharkiv machine building design Bureau. He is the fastest among all, which are in service with the Ukrainian army, and also the only non-Soviet production. However, the tank is still not launched in mass production, although it could counteract one of the best Russian tanks “Armata”.