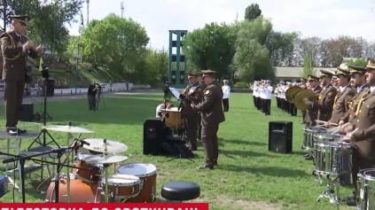 The best military musicians of the country preparing for Independence Day. At the National University of defense ended the dress rehearsal of the orchestra, says the story TSN.19:30.

Four hundred performers were collected in all regions of Ukraine. They will begin the holiday on a capital Khreshchatyk. Prepared in dress uniform despite the heat. The audience was the same parade that took place the audience in the stands. The repertoire of performances is quite varied – from military marches to classical music and jazz.

As reported, the main focus of the celebrations this year will be on history, it will be not only on the occasion of the 26th anniversary of Independence and the centennial of the establishment of the army of the Ukrainian people’s Republic. A new generation of defenders of Ukraine will be stepping to the sounds of the same Marchas the ancestors – March Lysenko. In addition, the parade will be attended by military musicians from abroad. In Kiev have already arrived members of the orchestra of Military-air forces of the USA.