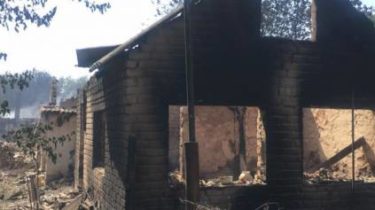 Water, Experienced and sand turned into a fire as a result of attacks of fighters. In the Sand the whole street burned to the bone, according to a story TSN.19:30.

The fire destroyed 50 homes, spread of fire was facilitated by the wind. Military confront trouble on their own, because they do not dare to involve civil fire technique – it can become a target for invaders. In addition, there are a lot of unexploded shells that can detonate from hitting cars SSES or simply from the temperature of the fire. “Old shells that did not explode they may explode. Be careful, all movement in the body armor,” – warn the military.

In the Sands there were only a dozen people and almost no surviving buildings. To those that still can be called fit for life – getting to close to the flame. 79-year-old Sophia Antonovna barely limping, the military advised her as soon as possible to move – she was crying. “Here was the bathroom, everything collapsed. Don’t know how to live further”, – said Mrs. Hope, whose house burned down.