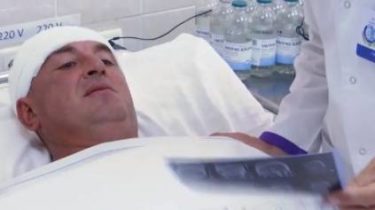 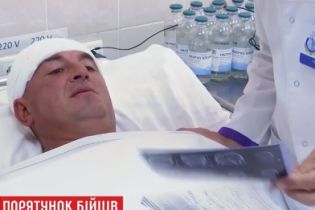 In the regional hospital of the Dnieper carried the two injured soldiers, says the story TSN.19.30.

One of them miraculously survived the bombardment of Water from a heavy machine gun. In the night the enemy fell to Alexander Savitsky just in the head. Soldier of the 59th brigade took a bullet to the brain.

“Direct hit on the loophole. Sighted there the capital, beating. The glare in his eyes. Grabbed his head, searched the helmet could not find. Understand, that the hand already wet, the blood. The trench reached the dugout,” – said the wounded

Military surgeons operated on the front line and was immediately sent to the Dnieper Mechnikov’s hospital. It saved his life, doctors say. Now 44-year-old wounded in consciousness. Ahead – the second brain surgery.

“The wound, at first glance, when the bullet breaks the parietal part, incompatible with life. Lucky guy. Help timely. And we hope that he will survive,” – said the chief doctor of the regional hospital. Mechnikov Sergey Ryzhenko.

We will remind, for the past day militants twice increased the number of attacks of positions of VSU, are increasingly using heavy weapons. In General, they are 47 times violated the truce. As a result of the clashes two Ukrainian defenders was injured, and three combat injury.