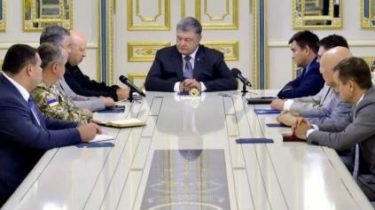 President Petro Poroshenko instructed to initiate consideration of the question of the innocence of Ukraine’s missile program of the DPRK at the meeting of the UN security Council.

He said this after the report of the working group on verification of information contained in the controversial article, “The New York Times”.

“Given the findings of the Commission wish to instruct the Ministry of foreign Affairs of Ukraine to prepare a group of experts and to initiate consideration of this issue at a closed meeting of the UN security Council. Separately it is necessary to publish the conclusions of the working group and the Interdepartmental Commission and to inform our international partners and to initiate a similar investigation by the countries concerned. In the first place, the same openness should demonstrate the Russian Federation”, – said Poroshenko.

In particular, the Secretary of national security and defence, workgroup Manager Oleksandr Turchynov reported Poroshenko that the working group conducted a verification after the publication of the NYT.

During check it was established that in Ukraine is excluded “the possibility of transfer of such goods to countries in respect of which it imposed retaliatory sanctions of the UN security Council”. Turchynov noted that Ukraine is conscientiously fulfilling its obligations.

According to him, the sensational article is “part of the information cover up and divert attention of the world community against possible Russian participation in the implementation of the North Korean missile programs.”

“The working group unanimously came to reasoned conclusions, completely refute the involvement of Ukraine to the implementation of programmes for the development of ballistic missiles in North Korea,” – said the NSDC Secretary.

We will remind, Poroshenko for the first time commented on the scandal over New York Times articlethat talked about the possibility of using Ukrainian engines during a launch of a ballistic missile North Korea. Garant said that Ukraine has scrupulously adhered to international non-proliferation regime and his rejection of the third nuclear power in the world has a unique contribution to international security.

Despite this, Poroshenko stressed that published in the American edition of information should be checked.

August 14, the American edition of the New York Times, citing expert analysis and assessment by American intelligence agencies reported that the success of North Korea testing Intercontinental ballistic missiles became possible due to the acquisition of powerful rocket engines on the black market, most likely, from the Ukrainian plant.