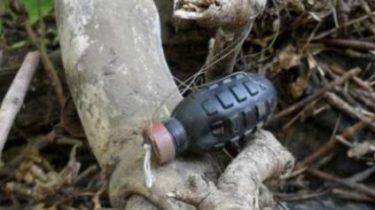 In the area of the ATO already has a new truce agreed during the telephone conversation leaders “channel four”. But people continue to die in the Donbass, even when the weapon is silent, because the frontal area infested with mines, the clearance of which may take decades, says the story TSN.19:30.

One of the women received lacerations of the head, back and limbs, when near the checkpoint went into the forest to relieve themselves. Inna says they accidentally tripped rotika. “Well, what can I say? I such a naive idiot, went back and it happened to you?” – says the victim. Her neighbor in the ward, Natalia shows leg when he smashed in the bushes, she stood in the queue at the intersection. The woman was driving from Donetsk for Mariupol on the sea, now instead of the sea is in the hospital. “I just happened to hurt don’t go nowhere, stood in place. Stabbed in the leg badly bleeding. From a woman who was hurt, I was 25 meters, the rebound bounced,” she says.

It all happened a hundred meters from the checkpoint, after which begins the gray area. The area is equipped and warning signs about the dangers, and restrooms, but the woman still went to the forest. Soldier Vladimir says that he heard a loud explosion, and then from the bushes came a blood-stained woman. In his opinion, the victim was very lucky that it was minor injuries. “She came out of the plantation. She was in a state of shock, covered in blood, she was immediately given first aid”, – he said.

Border guards say that constantly talking about risk, put signs and warnings, but people still climb in the bushes. “A lot of explosive devices not cleared. Moreover, there have not worked to the engineers, because here the direct line of contact,” they say. During the day a checkpoint is crossed by thousands of Ukrainians. Good, that such negligence injured the majority of the people are surprised, because during the war wypracowania iron rule: only go a proven way. “We in Donetsk there is only on asphalt. War taught,” recognized inhabitants of the occupied territory.