“School” silent mode: Merkel said the details of the negotiations in the “Norman format” 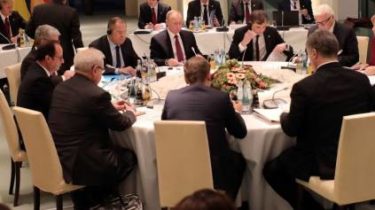 The leaders of the “Normandy format” commended the idea to declare a truce in the Donbass on the occasion of the beginning of the school year.

About this informed the official representative of the Federal government of Germany Steffen Seibert after talks in “channel format”, – writes UKRINFORM.

The heads of state and government, in his words, expressed the hope that this truce will lead to a sustainable improvement of the security situation in the interests of the students and the entire civilian population in the Donbas.

During the talks in the telephone format, the President of Ukraine Poroshenko urged to immediately release all Ukrainian hostages.

In the end, the heads of state and government agreed personally to work on further implementation of the Minsk agreement on the basis of a stable peace.