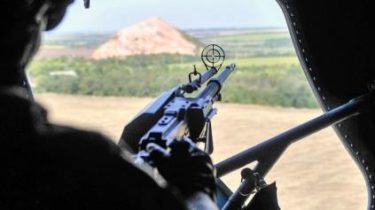 For Wednesday, August 23, in the area of ATO in the Donbas the militants 18 times opened fire on positions of the Ukrainian army. One soldier was wounded and another received a combat trauma.

This is stated in the summary of the press center of the ATO headquarters the morning of August 24.

“The last day in the ATO area has not completed safely. If up to 19 hours of activity of the Russian-occupation groups were minimal, night fighters in the usual regime started shelling our positions. So, four times from different directions using rocket-propelled grenades and heavy machine guns, the mercenaries beat on the Ukrainian strongholds in Avdiivka the industrial zone. In addition, at the direction of Donetsk under fire of the enemy came our strong points near Zaytsevy and Butovka. And about 23 hours criminals almost an hour of small arms fired at civilian houses of the Maori,” – said the press center of staff ATO.

At the direction of Lugansk at the end of the day militants fired twice. First – the 82-millimetre mortars in the area of Novoaleksandrovka – it is here that wounded a Ukrainian soldier. Also cases of militants grenade launchers recorded near Katerinovka and Crimea.

In the district of Mariupol militants shelled strongholds of forces ATO in the area of Pavlopol, Shirokino and Lebedinsky.

“Most of the armed provocations of the enemy our soldiers answered tight and aggressive fire from the weapon, not prohibited by the Minsk agreements,” – said Ukrainian military.

Recall that in Minsk agreed ceasefire in the Donbass.