Gas on the Russian front, Germany does not provide services Ukraine – Forbes 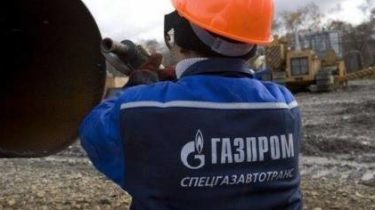 The biggest fear of Ukraine, according to the CEO of its major state enterprise “Naftogaz of Ukraine”, – is that Russia will be able to bypass the traditional transit route to Ukraine, using the North European pipeline.

This writes Kenneth Rapoza in the article “On the Russian gas front Germany does not provide services to Ukraine”, published on the website of Forbes.

At the end of last year, the Supreme court of the European Union lifted the ban for the Russian “Gazprom” on the use of the OPAL gas pipeline with a length of 290 miles in Germany. The Russians continue to possible to bypass Ukraine.

The ban was temporarily imposed by the court after the poles said that the Russians have too much market share. In any case it will not damage to “Gazprom”. Now that he is cleared, Gazprom will increase shipments, but, according to forecasts, it is unlikely to exceed the current demand for Russian gas. The market is still demand for Russian natural gas, regardless of the role of the EU as the white knight of Ukraine.

It is worth noting that Germany in no way interested in blocking Russia’s access to European gas markets, as do the Americans. In fact, the recent law on sanctions signed by President trump, gives the President the ability to block companies working on the pipeline “Nord stream-2” which, ultimately, will connect to OPAL. The Germans were furious when they heard the news, and some high-ranking officials have called for the introduction of counter sanctions.

On the one hand, the resumption of OPAL with this new project “North stream”, is completely contrary to [the efforts of] the United front of the EU, opposed by the Kremlin, which supports anti-government rebels in Ukraine. It is assumed that Europe should punish the Russians for what they split Ukraine in the Autonomous Republic in the East. But the most influential nation in Europe, Germany continues to give the Russians a comprehensive alternatives through which they can punish Ukraine for turning to the West, not the East. At the same time, natural gas is used as a tool of pressure on Kyiv.

The US has promised Ukraine coal, and Russia – to block construction of the pipeline “Nord stream-2”

Ukraine has always been a key transit route for Russian gas to Europe. But this is rapidly changing. And Ukraine don’t like this idea.

Videobrain sued due to the construction of “Nord stream-2”

“Naftogaz of Ukraine” is extremely important for Ukraine. As the company reported on Friday, in the first quarter, the company accounted for 16% of budget revenues of the country in the first seven months of 2017.

“It’s all politics,” he told me a few months ago, the CEO of “Naftogaz” Andrey KOBOLEV on new alternatives to the pipeline, opening for Russia. “If it is built the “Nord stream-2”, and it will be added to the “Turkish stream”, it is obvious that Russia will use them instead of a transit system of Ukraine, which will deprive us and the country of hundreds of millions of dollars in transit fees.”

The potential of Ukraine and the threat of the “Nord stream-2”. Talking about Poroshenko and the Minister of energy of the USA

“Gazprom” cooperates with the “BOTAS Petroleum” in Turkey to build another pipeline system through the Black sea. This is another alternative to Ukraine.

Since then, has been canceled as a six-month ban on the use of OPAL, the transit of gas “Gazprom” the pipeline gave him back the lead, about 40% of the capacity of the pipeline is concentrated in their hands. According to the operator of the OPAL pipeline “Gastransport”, delivery “Gazprom” has increased from 56 million cubic meters per day under the ban to 71.5 million cubic meters per day after the ban. Meanwhile, supplies of Russian gas through Ukrainian pipelines to Eastern Europe declined slightly.

It is a sign of things to come for Ukraine. OPAL connects with the already existing gas pipeline “Nord stream” that leads to Russia through the Baltic sea.

According to Slovak pipeline operator “Eustream”, the Russian gas transit via Ukraine August 3, fell about 8 million cubic meters, with 161 million to 155 million.

Ukraine refuses from Russian gas after legal disputes with “Gazprom”. In the past three years, the two countries are in conflict, which led to sanctions against Russia, Brussels and Washington.

Ukraine is still recovering from the political crisis when its former President Viktor Yanukovych in February 2014 was ousted as a result of popular protests. Last year the resignation of unpopular Prime Minister Arseniy Yatsenyuk.

Naftogaz disputed the resolution of the European Commission about the capacity of gas flows, Russia to bypass Ukraine

Ukraine has become the personification of the invasion of Russia in European politics, having served the interests of some politicians in the US and Europe, who for many years has accused Russia of a series of setbacks, not least, in “breccia” and the victory of Donald trump.

Access “Gazprom” to the OPAL became the subject of controversy since the adoption of the European Commission in 2009, the so-called Third energy package. The package does not allow individual providers to dominate the market. The share of Russia have, at least a third of the total imports of foreign gas to the EU, and Germany is the largest buyer interest coming from Russia.

“Turkish stream,” Erdogan said the restoration of cooperation with Russia

28 October 2016, the European Commission has agreed to exclude OPAL from the Third energy package until 2033, referring to the issues of energy security. Thus, they have increased the quota of “Gazprom” and gave him a much broader position in the spot market on the PRISMA platform, a leading European gas trading system. This step has given Russia more opportunities to supply gas to Europe via the OPAL in the foreseeable future, given the pipeline capacity today and in the long term.

Unfortunately for Ukraine, despite the blocking of Gazprom deliveries through the OPAL, the volume of Russian gas supplies to Europe in January amounted to about 19 billion cubic meters, which is 26% more compared with the year 2016.

In the first half of the year Gazprom exported 95.6 billion cubic meters of natural gas through OPAL, which is 12.6% more than in the same period last year.

This does not mean that Ukraine is outdated, despite stories that “Nord stream-2” buried “Naftogaz” and, by default, Ukraine.

According to Naftogaz, the transit through Ukraine grew by 21.8% to 45.7 billion cubic meters And they reached it without relying on Russian gas. Ukraine has hope, especially if it is to develop your own undiscovered natural resources and reforming the energy sector of the Soviet era. They have the skills to do this, and if there are enough hydrocarbons underground, they will not have problems with attraction of interested parties.

However, energy experts believe that now is when OPAL is open for Gazprom, the gas giant will be able to sell an additional 14.6 billion cubic meters in Europe this year.

The Stockholm arbitration has satisfied the claim of “Naftogaz” against Russia

Meanwhile, the transit capacity of the Ukrainian pipeline is not being used fully, because Russia is looking for other ways, said yesterday energy analyst from the business school “SKOLKOVO” Alexander Sobko the newspaper “Vedomosti”. “New export volumes via OPAL are likely to be associated with redirection of gas transit, not new exports,” he told the newspaper.

The throughput of OPAL is 36.5 billion cubic meters per year.