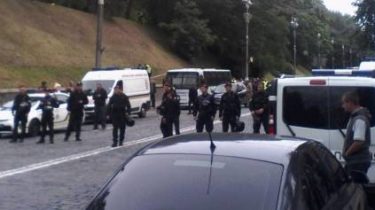 The main version of the explosion on Grushevskogo intelligence agencies called hooliganism. About it in the comment “Ukrainian truth” said the press Secretary of SBU Elena Gitlyanskaya.

She also noted that the task force special services in cooperation with the police is now working at the blast site.

At the scene are also the head of national police Sergey Knyazev and NSDC Secretary Oleksandr Turchynov.

Earlier it was reported that the explosion occurred due to the fact that the car of the Embassy of Azerbaijan threw the firecracker. However, this version is not yet confirmed officially.

Recall that after the military parade on Khreshchatyk, the police received the message about the explosion of an unknown object on the street Grushevskogo.

The bombing of the Government ( BL.14:00). Grushevskogo Str. A woman seriously injured lying on the ground. Another man shot in the head. 14:16 Ambulance is not so far!

As a result, the man and woman were injured. Of the victims from the explosion were reported.

#Explosion in the center of Kiev.